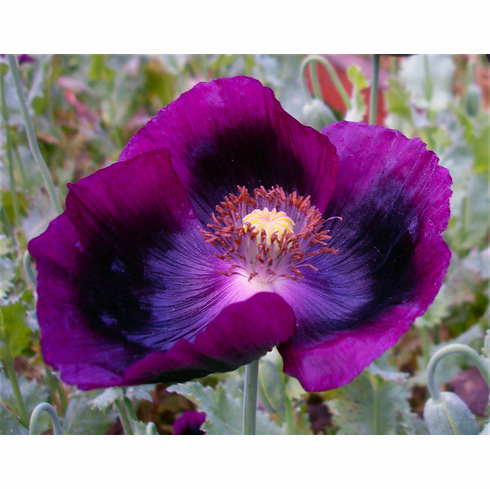 (Papaver somniferum) Years ago, when our farm was open to visitors, many were quite taken with our stand of deep "Purple Poppies" scattered here and there within the garden. Many years ago, Dianna had planted a double-flowered “black” that refused to stand up to our wind and rain, but the resulting seedlings from it when naturally crossed with other poppies... Wow! Due to our homestead flocks of chickens and turkeys scratching around the lilies, plus heavy mulching of the garden beds, meant very few plants grew naturally. However, last summer (2022) in one of the fallow (not used) fields, a few seeds germinated and grew into decent sized plants, despite absolutely no rainfall or irrigation for over 3 months.

Silky-textured, deep purple, single 5-inch flowers with a dark plum center on sturdy 4-foot stems are a focal point of garden during the months July and August. These are the annual variety used in baking (Bread seed), but are beautiful as a garden plant. Seeds can be sent with your bulb order. Because these poppy seeds are so tiny compared to ones generally found on top of muffins, each packet contains about 1/8 teaspoon of seed, which is enough to generously sow several "nursery beds" 18" across. When seedlings are an inch tall, gently transplant to a sunny spot with fluffy, well-drained soil. If you would like the seeds sent to you immediately upon harvest in September, instead of with a bulb order, we'll automatically add $2.25 for postage and mailer for up to 3 packets when we charge your card.

PLANTING.There are two options for receiving seed. Poppy seed can be simply included with your lily bulb order - or if sent separately - it will be sent in a regular business envelope ASAP for $2.25 extra for postage for up to 3 packages. (Poppy seed requires chilling, especially if fall planting in mild winter climates, simply put packet in Zip lock bag and freeze for a few weeks before sowing. Sown in spring is no problem, because we have already pre-chilled the seeds)

Seeds from this strain are very small in size, but can still add a quite delicious "crunch" to breads, cake and muffins and these beautiful flowers are easily grown in the home garden. Regular garden soils, not too rich with compost and other amendments are perfect. Fast draining soils are a must however, and in gardens that are mostly clay—a raised bed with native soil, sand and a light proportion of compost is perfect to provide fast drainage from heavy rainfall or accidental over watering.

Annual Poppies (flowers in one season and matures seed) can be planted anytime between fall and spring and you can collect the mature seeds to plant in another garden site for next year, use them in cooking, or simply let the pods mature and fall in place—called "self sowing". All poppy seeds need light to germinate, so if you cover them with soil, peat, vermiculite, or sifted compost they will not grow. Fallen leaves from trees and shrubs can interfere with germination by cutting off the light, but snow is not a problem, because as it melts, seeds begin to germinate, whether they were fall planted by you or growing from mature pods dropped on the ground in fall.

Fallen seed that was been buried and then brought to the surface during garden cleanup, roto-tilling or planting of other flowers may germinate several years later. In 2010, Dianna scattered surplus seeds in a bare section of field. Husband, Bob, not knowing what she had done, only saw Groundsel, Thistles, Dandelions and other weeds starting to grow in the "unused ground". He tilled the soil, which effectively blocked the seed off from light and so none germinated, especially with subsequent cultivation and planting of oats to build up the soil in preparation for a future lily crop.

When grain is used for a cover crop, they are thickly sown and tilled into the ground when they are about a foot tall to add nutrients and bio-mass to the soil—vastly improving the soil texture. Any poppy seed brought to the surface by the roto-tilling would not have had enough light to germinate before being shaded by fast-growing oats or barley. That fall a second round of oats were planted, tilled into the soil in late winter, and the lilies planted in March. To everyone's surprise, after we finally left the soil alone for several weeks, a nice scattering of poppies began growing in between the lily sprouts - and were left to grow together over summer. After all, who could weed them out with all they had been through?

1. Deeply dig a special nursery bed about 18” across and loosen the soil, removing any perennial weed roots, to encourage deeper taproots and further reduce watering requirements in summer. Sow one-third of a packet of seed in December/January, then plant the next third in a new area in February and remaining seed in March/April. Especially in the Pacific Northwest where heavy winter/spring rainfall can wash away or bury the tiny seeds before they germinate—you will have flowers from the later planting, which provides us flowers until heavy frost. Spring planting can be spread on top of the bare soil, but a wire covering (one-inch chicken wire) should be used to keep birds from eating your seed, no matter when you plant.

3. Using your fingertips, scratch the surface to make a very shallow "texture” on the soil surface. Not too deep—or the seed may become accidentally buried and not germinate.

4. Scatter 1/3 of a seed packet thinly and evenly across the entire prepared 18” circle. You can mix the seed with fine sand and sprinkle from a pepper shaker or whatever method works best for you.

5. Gently pat down the planting area with your hands to firm the soil and ensure the seeds make contact and will not dry out. This is the main reason why simply scattering seed throughout your garden does not work well; seeds may cling to leaves, sit on top of a rocks, mulch or may be accidentally buried while you weed in spring.

6. If rain is not expected on a regular basis for the next several weeks, then water with a fine mist from your hose, being careful to not form "puddles". During dry spring weather, keep the soil lightly moist until germination, after which you can let nature take over.

This is only possible if newly germinated seedlings are less than 1/4 inch tall—any larger and you risk disturbing newly formed taproots and the developing feeder roots. The photograph is of a 4 foot tall plant at the end of the season, pulled out of dry sandy soil, with nearly all the roots intact. See how there are not a lot of roots radiating out from the taproot? This is the reason you cannot move mature stems without damage.

Simply lift sections about 2 to 3 inches across and 4 inches deep of soil/seedlings with a small trowel and plant the entire mini clump of 15+seedlings—do not separate—to a new section of prepared fluffy soil. The strongest seedlings in each clump will continue to grow.

Commercial potting soil is generally more heavily textured than your native garden soil. When poppy seeds are sown on the surface, they will generally fall between soil components and not be accessible to light. When watered they may become buried even further. A good solution is to to simply sow a 1/4 inch layer of very fine, freshwater beach sand (not salt) or sifted garden soil on the surface of the potting soil and scatter the seed on top. Poppies do a fine job of self sowing on the finely crushed rock of our paths, so you can skip the "patting down" (step #5) with sand but be certain to keep the pot slightly moist. The soil underneath the sand should stay moist, even if the sand on top appears drier. If you wish to grow poppies in small pots to transplant later, simply sow a few seeds in each container and transplant the entire root ball when the plants roots have begun to fill out the pot but before the taproot becomes stunted. Do not thin, let the dominant seedlings grow. Separating the the seedlings doesn’t work—we tried that as well and both halves promptly died, because the fragile tap roots were damaged.

The brown colored pods in the photo are ready for harvest, the greener ones still have a week or so to ripen, based on weather. We simply cut pods off as the color changes and leave everything in a clean bucket to finish drying, then pour the brown and dried pods into a household strainer and the tiny seeds fall through into a new bucket. It is hard to retrieve all the seed in one or two passes, so the mostly empty pods are then scattered over a cleaned and prepared garden to break down over winter and release the remaining seed.