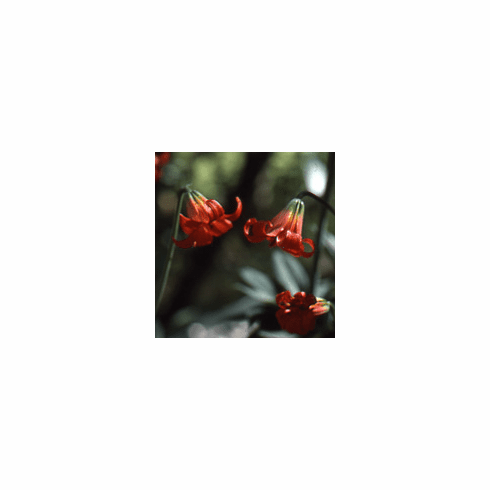 (Species / Wild Lily)
Rare in nature and even rarer in cultivation because of its near impossible requirements, this lily is native to the coastal areas of Northern California. Found sometimes just above the high tide mark, it grows in sandstone soils that usually flood sometime during the year. The pendant, bell shaped flowers are orange-red in color, blending to yellow and finally green at the top. Photo shown was taken in the native habitat of L. maritimum.

Lightly scented, this species is "protected" by California as being endangered, but we know of one instance where a group of college students risked being jailed, helping their botany professor save a colony from a housing development. They tried to get permits to move the colony by legal means and were denied, and so went in under cover of dark, just days ahead of the heavy equipment and moved everything to a similar, but more remote location. From what we understand, that colony was still thriving some 20 years later. Seeing these lovely little flowers in the wild invokes memories never to be forgotten. Title photo copyright B & D Lilies, all rights reserved.

Photo insets #2 and #3 were donated by Gene Mirro of his L. maritimum in bloom, June of 2012. Copyright Gene Mirro, all rights reserved. Used with permission. Thank you Gene.

Photo inset #4 showing well the throat of 'L. maritimum' was taken by Vernon Smith in N. California. Thank you Vernon for your contribution.

Side note on L. maritimum. In the late 1980's, a developer in N. California was going to build over the top of an established colony of this rare and endangered species. A local botany college professor petitioned the state for permission to move the colony before development began. The State of California told him in no uncertain terms NO, they were protected under state law. Subsequent petitions pointing out their demise brought on by development of the property were also met with a resounding no. The developer had a right to build on the site, destroying the lilies, but he could not move them. Solution, in the dead of night with some of his students, they dug the entire colony out and moved it to a safe location risking fines and jail time. Last reports were that to this day that transplanted colony was thriving.