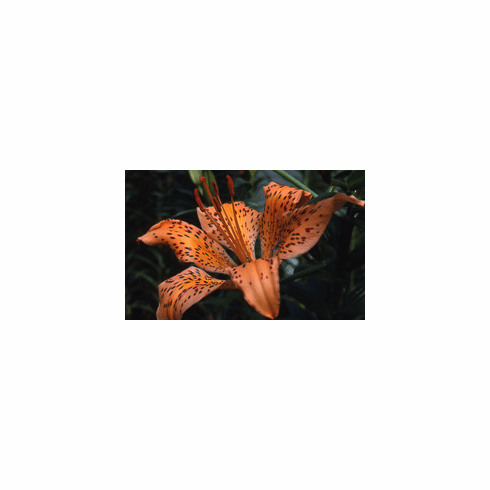 (Species / Wild Lily)
Its status as a species is sometimes disputed and has, at times, been lumped in with species such as Lilium dauricum . The Ofuna Botanical Garden has regarded it as a species and being a Japanese native lily, they should know best. Ofuna, in Japan where this lily is known as 'Sukashi Yuri, was our first source of seed for this wonderful lily. Title photo copyright B & D Lilies, all rights reserved.

Found growing in the beach grasses of the northern islands of Japan, as well as clinging to the sides of cliffs, this species is noted for its extremely heavy root system, required to anchor it against winter storms. The flowers are rather open and are a lovely shade of apricot orange with a tinge of pink. A strong grower in the garden, it is spotted in purple-black. The most notable variant of this species is the yellow form, Lilium maculatum flavum , which we feel is even lovelier than the type.

Photo insert is of L. maculatum growing just above the high tide mark in the beach grasses near Tateyama city in the Tomisaki area. This photo example comes from: http://navi.tateyamacity.com