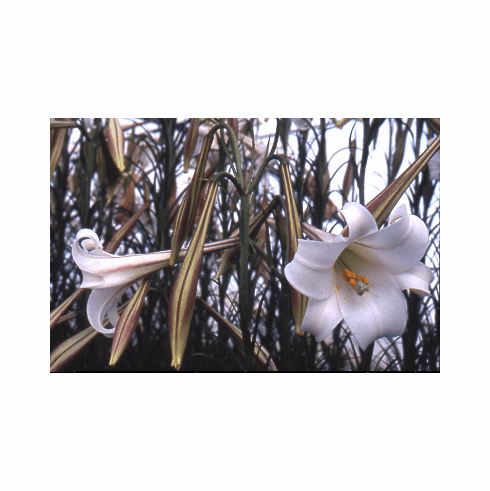 (Species / Wild Lily)
As its name would indicate, this is a native of Formosa where it is found growing among the bamboos in volcanic, sandstone soils. Found at elevations up to 10,000 feet, this species is highly susceptible to virus and was often used as a test plant to detect virus infection in the early years of hybridizing. The procedure was to scratch and wound the stem of a plant suspected of virus with a soft brass brush, and then scratching the stem of Lilium formosanum to see if it would become infected. The long, narrow funnel flowers are white, with pink on the outer mid-rib. Short lived, it sets seed freely and will often bloom in the cool greenhouse, as shown here, within twelve months of being sown. Suitable for the rock garden. Photo copyright B & D Lilies, all rights reserved.

Photo inset #3 was labeled by Edgar Kline as L. formosanum "Early Form" indicating that he was going both this and a later flowering variety. This photo from the late 1940's was provided by Bill and Mary Hoffman.