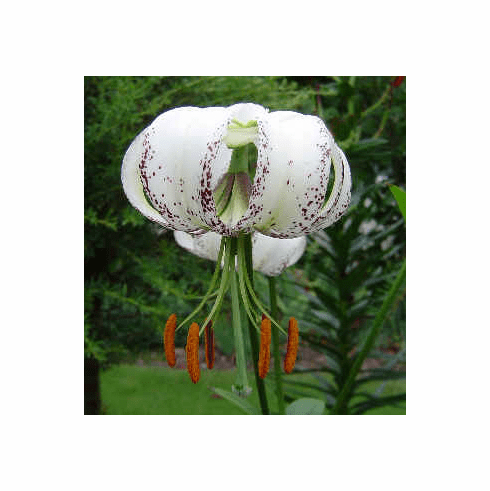 (Species / Wild Lily)
This Chinese Alpine native, is found in the mountains of the Lanchang Juang-Nu divide in northwest Yunnan sometimes at more than 10,000 feet (3000 meters). Named for the French botany professor, Pierre Duchartre, it likes damp to boggy ground and is happy in woodland margins. Once called 'Farrer's marbled martagon, Lilium duchartrei produces as many as a dozen flowers in an umble form. This lily with its pleasing scent was first introduced in 1869.

In cultivation it seems to prefer a lighter soil (Sunshine Blend #4) that is uniformly damp throughout the active growth period. Produces a stoloniferous type bulb similar to L. canadense or L. superbum. It is best grown from seed as bulbs of Lilium duchartrei very much dislike being moved even from one end of the garden to the other. Lilium duchartrei flowers in nature in July and seed is mature in September. Seed is classified as being immediate epigeal for germination. Best grown in areas with ample water during its active growth period, bulbs will rot in soggy winter soils.

Title photo courtesy Wikimedia Commons and was taken by and copyright by Thorkild Poulsen, all rights reserved. Original photo cropped. This file is licensed under the Creative Commons Attribution-Share Alike 2.5 Generic license.

Photo inset is of one of the historically important Edgar Kline photos taken in the late 40's as provided by Bill and Mary Hoffman. Labeled as L. duchartrai var. fargesii, this was the old identification of L. duchartrei in the early 1900's. Both L. duchartrai and L. fargessi are separate and distinct species. Photo shown is of L. duchartrei.