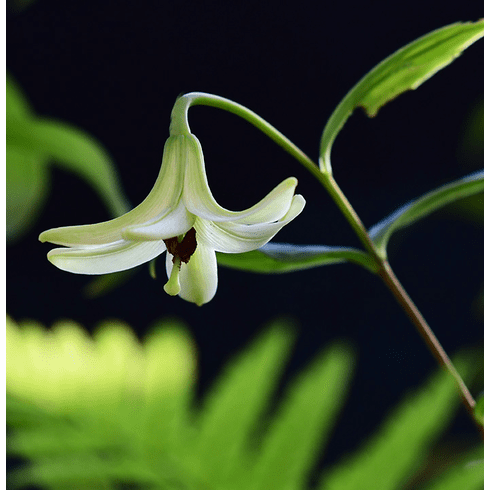 Flowered by Pontus Wallstén of Switzerland from a bulb he said was received from Mr. Paul Christian purchased originally from Yijia Wang of China. Yijia has explored the area of Viet Nam where L. poilanei is found in nature, and has also submitted photos of flowers taken in the wild. Pontus said when submitting these photos "I am not sure thatL. poilanei unicolor would be its recognized name, but it is a form without the purple center".

As with the L. primulinum variants, there remains many unanswered questions due to rarity and inaccessibility of the areas where these lilies are found in nature and have been seen "up close and personally" by a very small handful of explorers. Used with permission.

As a side note, Yijia has discovered several yet to be named species in the mountains of China leaving one to believe we have only scratched the surface of lilies native to nearly inaccessible areas of China.

Pontus has an excellent book titled 'The Lily Species and their bulbs' and he can be contacted by email at pontus.wallsten@bluewin.ch for more information. He also offers some rare species lilies in limited quantities that are shipped from his nursery in Switzerland.