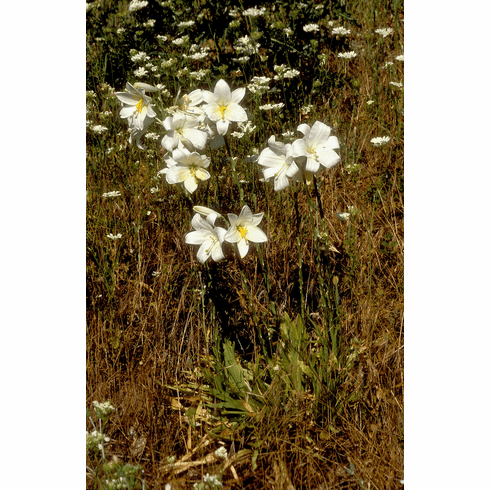 (Species / Wild Lily)
Rarely seen in commerce, 'L. candidum var. salonikae is easily recognized by its small flat pointed tepals. It is a fertile wild form and it is said that during WW1 an English soldier stationed north of Salonika sent home this variety. The small, undulate basil leaves are another distinguishing feature of this variant of 'L. candidum'. George Slate, when at Oregon Bulb Farms, crossed L. candidum with var. salonikae to produce the 'Cascade Strain' which was highly resistant to botritis.

This photo was taken near Konitsa, Greece. Photo is from Wikimedia Commons as was cropped. Photo taken by Ernst Gügel. This file is licensed under the Creative Commons Attribution-Share Alike 3.0 Unported license. Thank you Ernst for sharing this unique habitat photo.