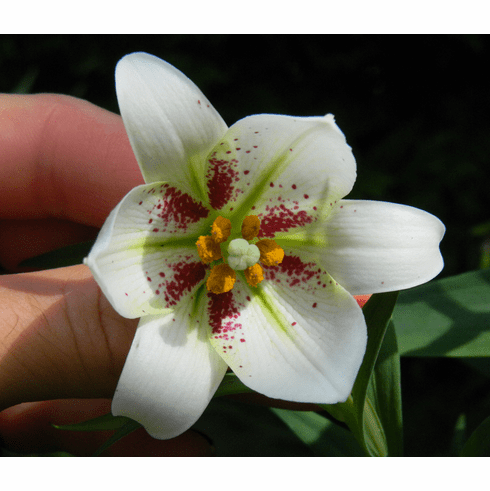 (Species / Wild Lily)
Found growing on grassy slopes, 4,500 to 8,500 feet, (1,400 to 2,600 meters) this subspecies normally produces only a single flower on a 10 to 12 inch stem in June. It prefers cool conditions and soils that are rich in humus and have some shade. Best planted as seed as bulbs resent being moved. It can take up to 6 years to flower from seed. Seed germination is reported as being immediate epigeal.

There was a subspecies of var. sempervivoideum registered as L. pinifolium reportedly found in Lijiang, Yu Long Shan, Yunnan, China at an elevation of 10,000 to 11,000 feet (3,000 to 3,400 meters) in June of 1981. In the years since, there have never been photos taken nor further information of its being "re-found". It is felt by many that it was probably just a variant of var. sempervivoideum as its 1981 description sounds very much like the 'Lilium bakerianm var. sempervivoideum' in the title photo. Much like L. Pyi, it probably should never have been listed.

Photo copyright Pontus Wallstén of Switzerland. Used with permission. Pontus has an excellent book titled 'The Lily Species and their bulbs' and he can be contacted by email at pontus.wallsten@bluewin.ch for more information. He also offers some rare species lilies in limited quantities that are shipped from his nursery in Switzerland.