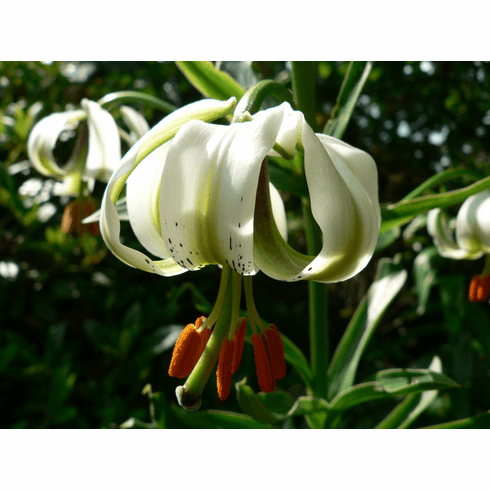 (Species / Wild Lily)
A native of the Talysh Mountains in Azerbaijan, L. ledebourii is found from about 3000 to 5000 feet in elevation in oak forests and clearings. Cultivation is similar to the other Caucasian lilies such as L. monadelphum succeeding in a variety of well drained soils with light shade throughout the day. This lily has been described as having a “surprisingly delicate fragrance reminiscent of vanilla”. This lovely species was named in honor of Professor Karl Friedrich Ledebour.

Ed McRae grew this species at the old Oregon Bulb Farms in the early 1970's from seed provided by V. Erimin of Russia. It has been reported to cross with
L. candidim, better known as the 'The Madonna Lily'. Given the political tension between Azerbaijan and Iran where this lily is also found, further exploration of the area for other yet to be found species is not likely.

This beautiful and rare lily was grown and photographed by Alan Mitchell of Scotland and we thank Alan for his contribution of this outstanding example of this rare and beautiful species. Photo copyright Alan Mitchell, all rights reserved. Used with permission.

Photo Inset #1 from Wikimedia Commons under GFDL License. Attributed to Iman Mirabzadeh, copyright Iman Mirabzadeh, all rights reserved. Photo taken in the village of Damash in the Iran. Original photo was cropped.