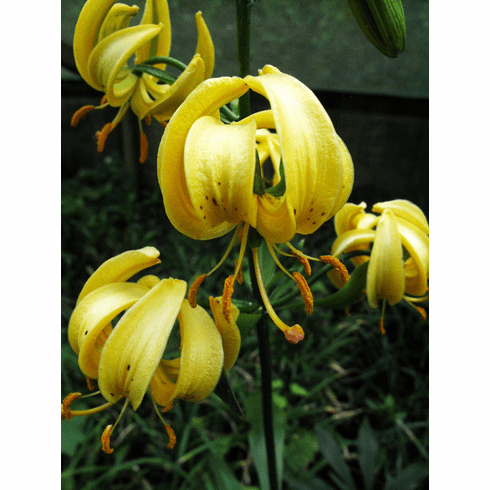 From the cold forests of Aomori in the most northern area of Honshu Island, Japan in one of the few areas where this variant is found, Bleddyn and Sue Wynn-Jones of the United Kingdom collected seed of this rare yellow color form of L. hansonii in the autumn of 1997. Bleddyn describes the bulb as being "scaly", producing upright stems to 1 meter, about 3 feet, with whorls of broadly lanceolate leaves. When found, no flowers were present, only fat seed capsules. The flowers are strongly scented, turks cap in form, have brown spots and open in June. As with the orange form of this species, it does prefer some light shade and humus rich, well drained soil. Reported to be lime tolerant. Photo copyright Bleddyn and Sue Wynn-Jones, all rights reserved. Used with permission.

In the March 14, 2015 Japanese Times, the 'Aomori Forest' was described as being "The Forest Outside of Time". The article went on to say, "Whereas the biodiversity of many of Earth’s primeval beech forests was decimated by continental glaciation about 2 million years ago, the forests of northern Japan escaped that fate, making them living time capsules of a kind".  Fortunately, one of the things preserved in this "living" time capsule was 'Lilium hansonii var. aomori'.

Bleddyn and Sue Wynn-Jones own and operate Crűg Farm Plants in the United Kindgom. Their web site can be found at http://www.crug-farm.co.uk and there you will find a wonderful selection of nursery grown lilium species ranging from the more common to the most rare.